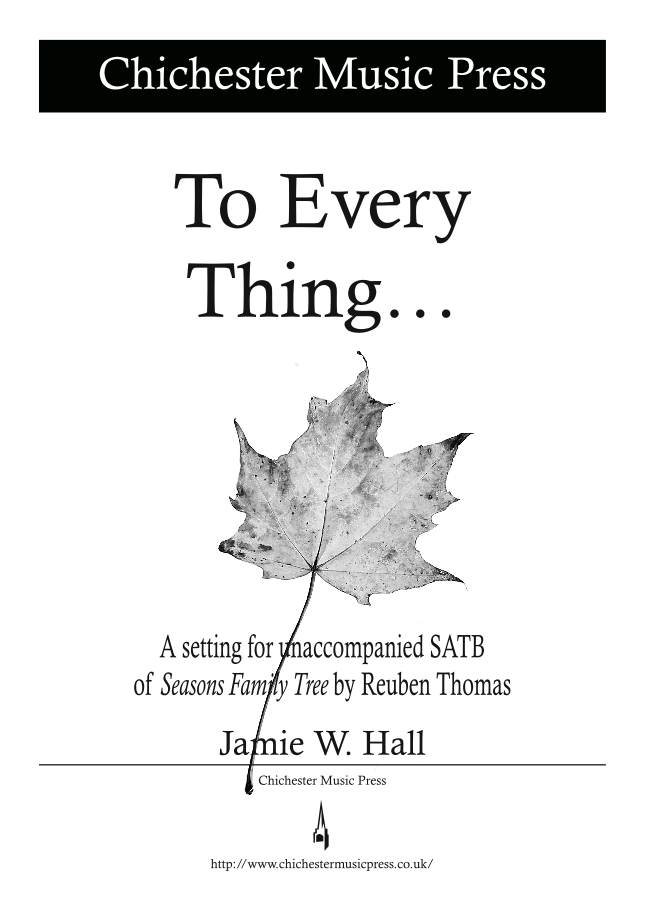 Seasons Family Tree began in Winter: I spotted one November afternoon on Facebook that Jamie had trouble publishing a piece, and asked him why. His tale of failing to obtain permission from the poet's estate to use the original lyrics reminded me of another choral composer's most successful work, and I asked whether he'd like me to try writing new words for the music he'd already composed. He encouraged me to have a go, and by midnight I had the words, roughed out on a bike ride to a rehearsal that bitterly cold evening. To avoid any chance of accidental plagiarism, I cast around for a second theme, and immediately thought of my grandfather, slowly sinking in dementia, having lost my grandmother to the same dreadful disease earlier that year. I tried to put his eloquently expressed feelings into the words he could no longer find.

When Jamie told me he was thinking of a series of seasons, the obvious route was to consider the other living generations of my family. Since I have no children, and as writing about myself would create an awkward asymmetry, it was natural to veer on to my brother's branch of the family tree; I wrote the remaining seasons in ascending order of age. The meter and rhyme schemes were chosen so that each season becomes the next by swapping one pair of lines.

Poetry that can be explained in prose is merely verse, but some general remarks seem in order. In each season I tried to remember or imagine what it was or would be like at each stage of life, and locate the knot of fear and hope that defines each. Summer turned out to be the hardest both for me and Jamie: somehow the sideways step to become my brother was bigger than the leaps forwards and backwards.

Jamie's deceptively simple music blends the characters and seasons along two musical axes: the four voices that compose each season, and the musical shapes that recur in varying seasonal garb. These devices, impossible in text, cause each season to echo in the others, and conversely makes each movement a miniature of the cycle. Simultaneously a wonderful privilege for and stimulus to me, it's also a brilliant illustration of the immediate power of pairing words and music, which I hope will pierce you too!

To Every Thing… is a choral cycle of poems by Reuben Thomas which capture, much like a family photo album, snapshots from the changing seasons of life's year.

In creating this cycle, I have tried to remain faithful to the colours, contours and innate rhythms of each text, using music as a vehicle for the poetry, allowing it always the space to be heard clearly and understood. As such the rhythmic and melodic material used for each of the four voices is relatively straightforward, the interest lying in how these parts interact. It is essential therefore that each part be sung with clarity and accuracy and tempi chosen to allow each passing consonance or dissonance to speak clearly.

The cycle may be performed starting at any season and proceeding in seasonal order.